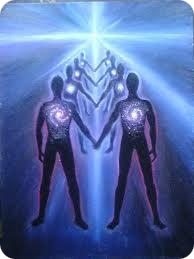 Beloved One, we have spoken over the years of many concepts, bread crumbs as they would be, leading you to the place where you find yourself now in your understanding of Who and What you are. We have given you clues along the way, ideas to play with, concepts that have expanded your mind and your understanding; questions sometimes which allow you to think so long and so hard that finally you have tired of thinking and you have allowed the heart to know the answer; in other words, to feel the peace and the joy of the Christ.

Each time you choose to acknowledge the Christ power of you, you change the vibratory rate of the collective consciousness and you allow it to ascend. And truly at some point the collective consciousness is going to awaken and it is going to feel an ascension. Sometimes the bodies will feel it also and there will be the physical ascension, but that is not the important goal. That can happen, because you will come to that “Aha!” place where everything dissolves into Light and you no longer need/want the body, and you are so Light that you ascend. But that is not, as I have said, the goal.

The goal is to awaken to the place where you have the divine moment and you know, truly know, “I Am That Which I Am, that which I have always been. I Am the Christ, and I celebrate the Christ of me and — because there is no separation — the Christ of everyone I meet.”

Everyone you meet you have invited to be in your consciousness, to be in your awareness. Everyone you meet is of the same energy and the same fabric that you are. Everyone is the Christ, whether they know it or not. And you, as the days go by, are going to be recognizing more and more Christs walking, interacting with you, to the place where you are going to be smiling and welcoming them.

We have been speaking in previous times about the changes that are happening and the changes that are anticipated in this year. And there will be changes; they are already happening. We have spoken of the divisiveness, where that which is not of Light is showing itself and inviting the Light to shine upon it.

You are at a place where you will be feeling the changes, and some of them will feel good and you will understand them. Some of the changes will require that you take a deep breath and stand in the neutral place of Beholder for a moment or longer in order to see how they might lead to the Atonement, the realization of at-One-ment.

You are very strong, so it is not going to hurt you any to be with others who have differing viewpoints, but you are going to want to come back to a place where you can let down some of the armor which you have put on for many lifetimes, and you can just be with friends because they love you, they understand you, they know what truly is happening: not what appears to be happening, but what is truly happening. Some of the changes are going to be great. They are going to be all for the good, even though at times they may not look that good. And if you are with friends and you can affirm that, “This, too, shall evolve into the realization of the whole Christ,” then whatever is going on is going to take on a different appearance, quite literally in some cases.

There is truly nothing to fear. Hear that well, because once you take hold of that idea, that Truth of your being, that there is nothing, truly nothing to be afraid of, fear loses its power. Fear has been your companion many lifetimes, and you have learned how to armor yourself because you thought there was something out there which was stronger than you.

Fear is not a truth. It is the truth with lower case “t”, but it is not True with a capital “T”. Fear is something you have created in order to adventure, to have the rush of adrenaline. There is nothing outside of you and there is nothing that you need defend yourself against.

One of the big changes that is coming about this year is the letting go of fear. Fear no longer has power over you. It only has power as you give it power and think that it might be true, but it is not.

The only Truth of your being is that you are energy, energy that I have called Love. I have likened that energy to love because when you are in love, you feel expansive. And when you are in love with someone, you forget the small self and you are only interested in the other one. For a moment or longer you find yourself forgetting yourself and the armor that you thought was necessary, and you feel yourself to be One with the person who stands before you. You know only Love.

Love is expansive. Love is energy, and you are energy. You have always been energy, and you have always had choice how to use that energy, how to fashion and form it. And then as you have created, you have found yourself enamored with your creations to the place where you felt that you had to defend those creations. You have felt that perhaps something could come along and knock over your sandcastle or whatever you had created, and so you began to identify with your creations to the place where you have forgotten that you created the creation in the first place.

But the true power of you lies in your realization of the Christ of you that has never been lost. You have had a lot of adventures, but you have never been lost. Furthermore, you have never sinned. You have made choices and you have lived with the result of those choices and have gone on to make other choices, but in Truth, verily, you have never sinned. You have played, the same as you will watch the little ones as they play in the sandbox or they play on the different equipment. They make choices. Perhaps they climb up the monkey bars and maybe they fall down. But they get up, brush themselves off, maybe they cry a little bit because they want somebody to acknowledge who they are and that something has happened to them. And then what do they do? They run off and do it again quite often. You have done the same thing in lifetimes. You have gone through adventures.

In truth, the divine energy of you, the Christ of you extends even farther than you can imagine. You are part of the cosmos itself. The cosmos, the constellations, all of what your scientists are now bringing to your awareness, is there only because of you.

You do not need the employment, someone else giving you directions so that you can earn the golden coins. If you were not in that employment, you would be serving somewhere else, because that is what life is for: to love, serve, and remember. So if you were not where you are, you would be somewhere else serving and loving, and there would be an exchange of energy because there has to be. There is never a vacuum. There is always an exchange of energy.

Your responsibility is to be aware that there is an exchange and, even though it may not look like the golden coins, there will be an exchange; there has to be an exchange. Nothing is ever done in a vacuum. And then you begin to realize that the ways that you are being paid, the exchange of energy, can be as varied as the grains of sand on the beach—many, many different ways it can come back to you, and will.

You will never be lost. Ones fear laying down the body because they question, “Where do I go? Will I still have consciousness? Will I be lost, adrift in the void somewhere?” No, you will always have consciousness. You will always know yourSelf—the greater Self, capital “S”—and in fact, many who awaken after having released the body feel very joyful because they are free. They expand.

The light at the end of the tunnel is your own light, and you expand into that light. There is nothing to fear. Now, I am not saying that message because you are going to release the body soon. In fact, you are not because there is much work to do. The harvest is great, and the laborers are very much needed.

So you are not going to lay down the body while there is still work to do. But when you come to the place of knowing completion with this incarnation, there is nothing to fear. It is only going to be all joy, Light, expansion—but not yet, because I need you to do my work. You are my hands, my feet, my smile, my words of comfort to ones who cannot see me, who do not maybe have yet the belief system that will allow them to know that they are not alone.

Some of them call out to me and to my mother, Mary, and they want to know comfort. But when we answer—and we are always there with them, with you, each and every one—they do not hear us because a long time ago they were told that they were not worthy to know Oneness. They were not worthy to have their prayers answered. If they did not pay the priests and rabbis, make sacrifices in the holy temple, then their prayers did not amount to anything. You were taught that in many lifetimes.

You are Life; always have been, always will be in one form or another; always serving the Light, because you are the Light and you recognize that which you are.

And you recognize other ones who are beginning to awaken to the Light that they are. You celebrate the Light with them. That is why I say to you, seek out ones of like mind and be with them as much as is possible, because the feeling of Light and the awareness of the divinity of you expands as you reaffirm the Truth of your Being.

If you surround yourself with—I will use one of your words here—negative people, you know how that feels. It feels heavy, constricting. That kind of energy has yet to awaken to All that it is.

So as much as is possible, seek out ones who are ready to have joy in their life, to know innocence, to play, to laugh, to sing, to celebrate truly the birth of the Christ. It is the awakening Christ who reads these words. You have foreordained that at some point in linear time you will know the Christ of you, and this is the time.

in expression through Judith

Copyright © 2011 Oakbridge University. Oakbridge material is copyrighted but free to anyone who wants to use it as long as proper credit is listed, including our website address www.oakbridge.org.